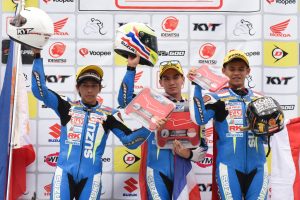 Team Suzuki Pilipinas bagged another victory during the Suzuki Asian Challenge (SAC) Round 4 held at Sentul International Circuit in Bogor, Indonesia. Davao’s pride and the team’s current frontrunner April King Mascardo grabbed the 2nd place on Race 1 after an intense battle with his contenders. 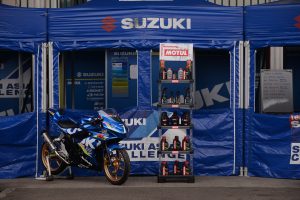 The team had a great start during the practice sessions while familiarizing their motorcycle – the GSX-R150 – Suzuki’s revolutionary sportbike which is the lightest in its class bearing the same DNA of its big brother – the GSX-R1000. This is the second time that the team raced in Sentul which features a broad track with large runoff areas enabling more freedom in driving at racing speeds. A relatively old track, the runway however had some bumps that our riders had to manage. 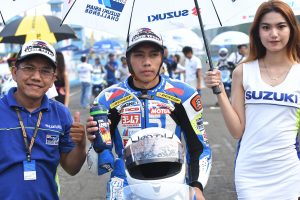 The Qualifying Round saw Team Suzuki Pilipinas’ April King Mascardo going fast with a best lap time of 2.00,263, which is behind the best time of 1.59,711 that landed him on 3rd grid. Mario Borbon, Jr., on the other hand recorded a best lap time of 2.01,512 which gave him the 8th grid position. Eane Jaye Sobretodo, despite his flu was able to finish at 12th position. 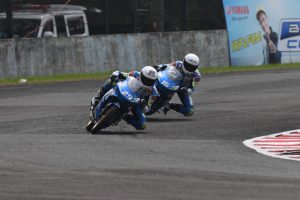 Race 1 saw a heart pumping battle among the contenders with Team Suzuki Pilipinas taking turns in the lead. All seemed to be grouped as one until the last 2 laps wherein 2 riders crashed creating confusion to the whole pack. Emerging still strong were 3 riders Punchana Kulrojchalalai of Thailand, our very own April King Mascardo and Ahmad Saugi Muchtar of Indonesia. Sobretodo gave a surprising performance too finishing at 5th position and recording the best lap time of the race with 2.01,192. Borbon Jr. got affected by the crash but still emerged at 9th place. 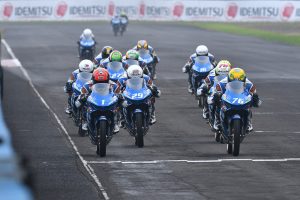