For over 13 years, the Suzuki Raider breed has been dominating the Philippine roads with its unparalleled engine performance. Since the introduction of the Raider R150, the country’s Underbone industry has never been the same even dubbing the carburetor bike as the Underbone King.

Powered by Suzuki’s reliable 150cc double overhead camshaft (DOHC), 4-valve, 6-speed transmission engine, the Raider R150 has already captured the hearts of the Filipinos. The R150’s slim body holds very well its highly powerful engine giving a very light yet authoritative ride. All packaged in a very distinct appearance, the Raider R150 is always the choice of all riders who want to step up from their scooter and 100cc underbone bikes.

The Raider’s dominance can be traced back in 2002 when its brother – the Raider R125 was launched. Two years later, the Raider R150 was born and it forever changed the course of the competition in the Underbone category. After more than 13 years, the Raider bikes have made their mark in the motorcycle community. Considered as the breed that leads backed up by its promising sales of more than 130,000 units since its introduction, the Raider breed has also formed communities of riders and enthusiasts sharing the same passion for riding and the bike.

To celebrate this supremacy, Suzuki Philippines staged a grand gathering of Suzuki Riders – the Suzuki Raider R150 Summit on January 10, 2016 at the World Trade Center designating no less than 2800 riders in the motorcycle industry’s biggest riders-only event from a single manufacturer. No less than 45 clubs from different parts of country were present during the event – from Ilocos down to Koronadal – Suzuki riders were all excited for this assembly. 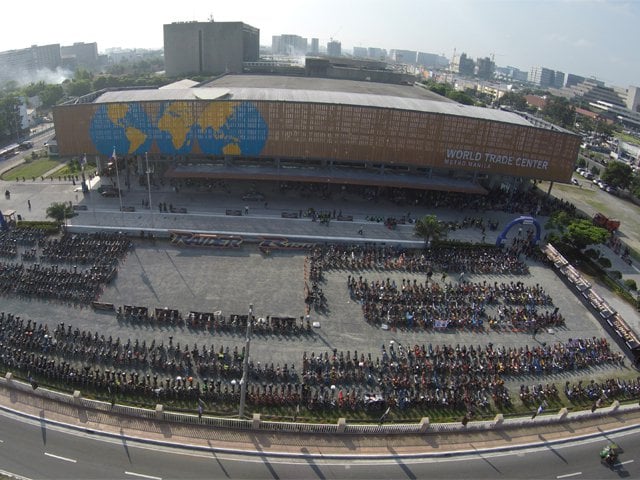 As early as the evening of January 9, participants were already arriving at the venue and came the dawn of January 10, a long line of riders could already be seen at the foyer of the World Trade Center. In spite of the long drive to the venue, all of them were in high spirits and all enthused to celebrate the day with their co-riders and Team Suzuki.

A great sight to behold, the event kicked off through a drone shot of all riders in the vast front parking of the APEC Summit 2015 venue. It was then followed by a ribbon cutting spearheaded by Suzuki Philippines President Hiroshi Suzuki assisted by the brand’s Motorcycle Division Sales and Marketing General Manager Jun Bulot, Marketing Manager Monch Bontogon and Assistant National Sales Manager Mitsunori Shiraishi. 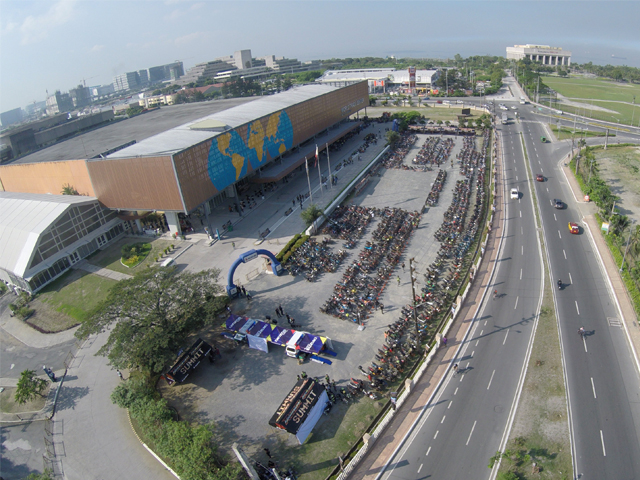 Pumped up by the party music, the big crowd were dancing and jumping while entering the venue – an organized chaos that could give any observant goose bumps. This only showed how astig the Suzuki riders are managing to be discipline while having fun at the same time. They were all greeted by a very modern club party set-up with informative display on the Raider R150’s evolution – from the Raider R125, the first generation of the Raider R150 launched in 2004 to its redesigned head and updated decals, plus other Raider bikes – Raider J 110, Raider J Pro and the Raider J115 Fi. 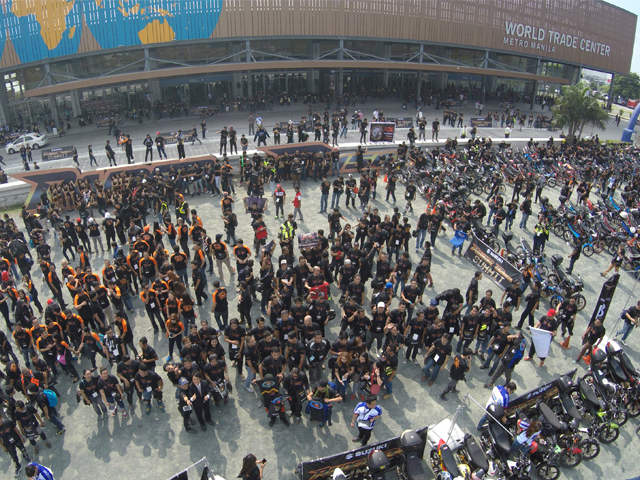 At the center of the venue is one of the main highlights of the event – a line-up of 28 Raider R150 motorcycles all customized and modified – displayed like kings of the road and exact epitomes of the real Underbone King. Being a carburetor type motorcycle, the Raider R150 can easily be modified and thus riders have the freedom to develop their beloved R150 to their desire – an advantage that cannot be seen in the other motorcycles available with the same displacement. How a motorcycle looks and performs speak a lot about its owners and judging by the multitude of great looking R150’s on the road, it can already be attested then that the R150 riders are equally forceful. 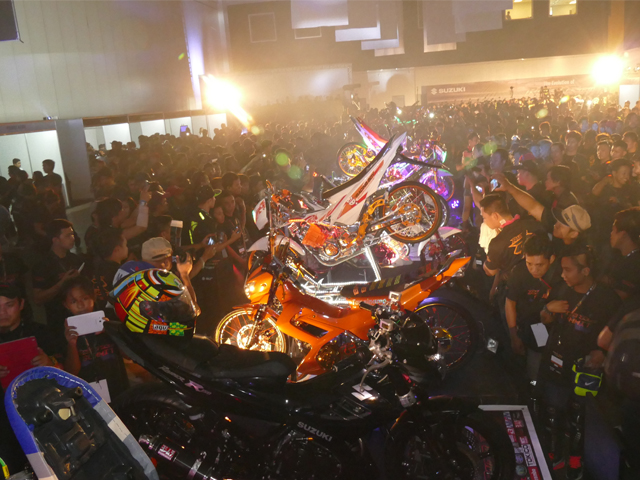 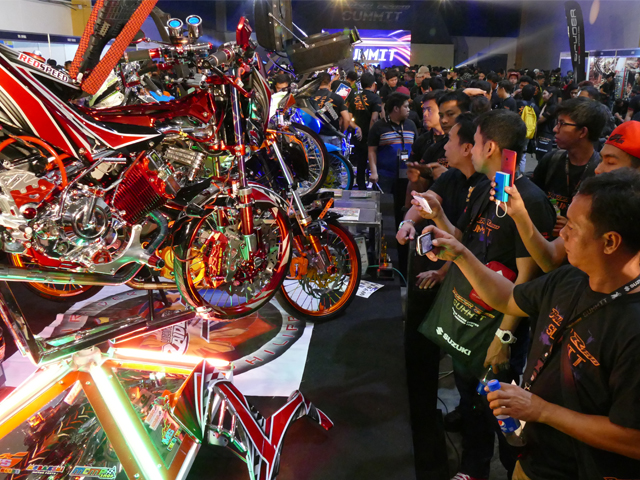 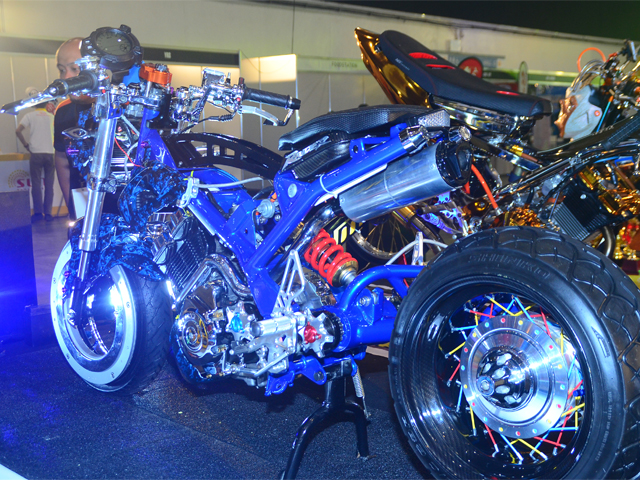 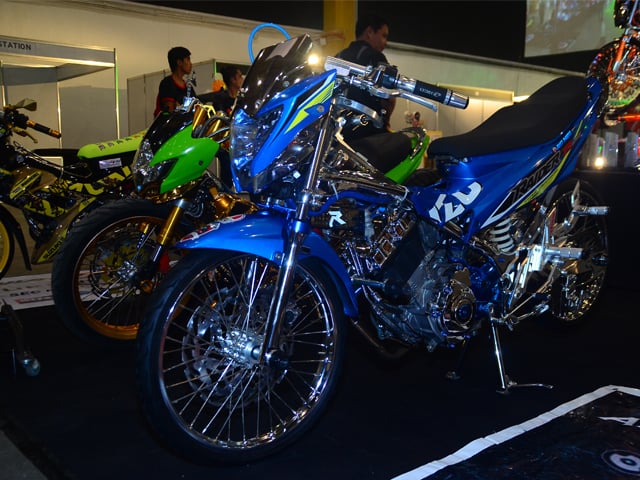 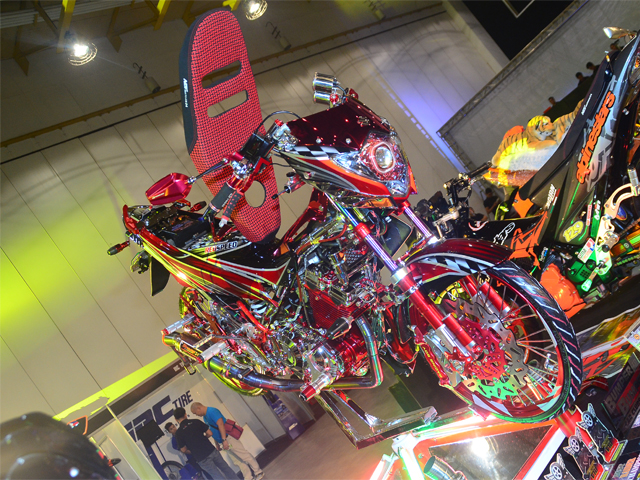 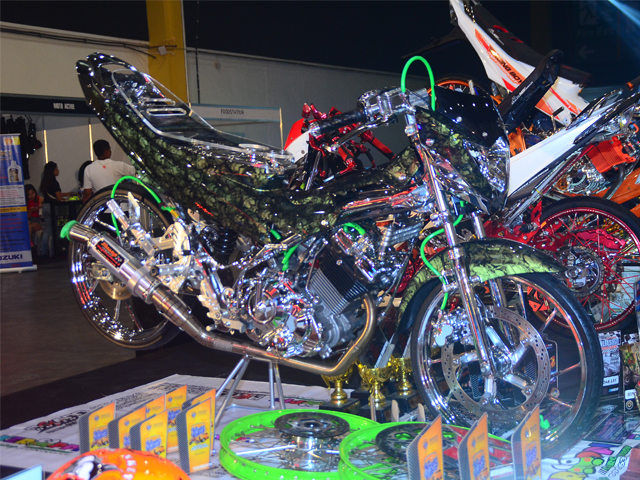 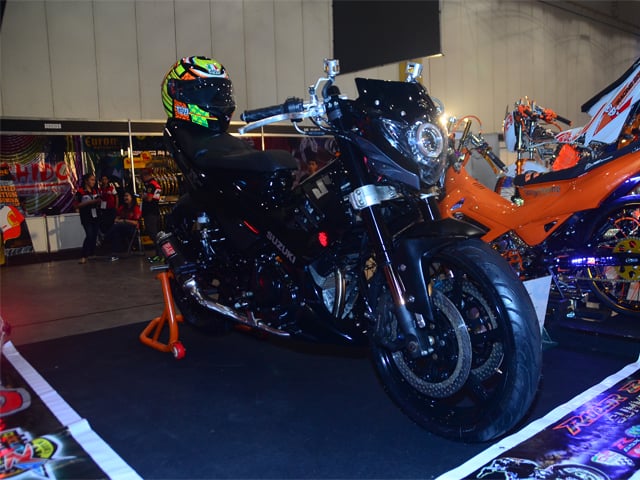 The contest was composed of two categories – the Custom Bike Contest which focused more on external design customization and the Custom Racing Bike Contest with engine modification as the concentration. The Best Concept Bike title or the most unique went to Mr. Johnie Rey Nabua who traveled as far from Isabela just to attend the celebration. The Best Custom Bike award on the other hand highlighting the craftsmanship and how all parts were put together went to Raider R150 Brotherhood Mindoro member SPO3 Josing Gega Jr. The Best Custom Racing Bike recognition went to the modified 300cc R150 engine by John Benedict Ibasco of Club R150 NCR who wowed the crowd by continuously revving his motorcycle. Special awards went to Johnie Rey Nabua for the Media Choice making this title his second win and Jonard Javier for the Rider’s Choice of Binangonan, Rizal with his powerful black ride. The Best Chrome went to Michael Angelo Apostol of Bacoor, Cavite while the Best Paint was awarded to Reyson Cello Mesina of Pangasinan. Winners of the major prizes received a cash prize of Php 30,000 each while minor awardees took home Php 5,000 each. 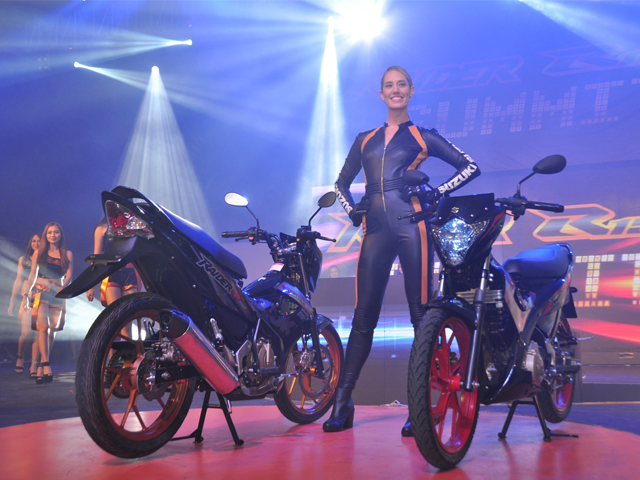 Suzuki continues the Raider story which is still the undisputed Underbone King. The R150’s supremacy goes on with the launch of the Raider R150 Reloaded – an enhanced version of the much-loved Raider R150. Reload your ride with the new Raider R150 with its updated decals and unique wavy disc brakes that will surely stand out like a king on the roads. It also features a keyshutter for additional security. For more safety, The Raider Reloaded also comes with tubeless tires already. All these are packed with the brand’s 150cc DOHC 4-valve, 6-speed engine. The Raider R150 Reloaded will be out this January and will come at an SRP of Php 94,900.00 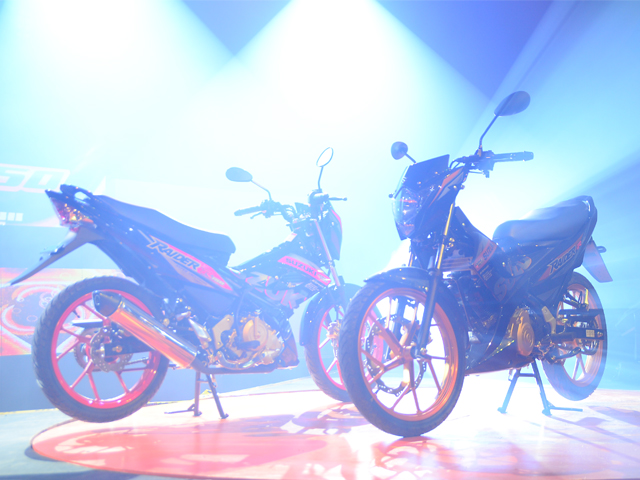 More than the fun and the numbers, the event is also Suzuki’s way of showing its gratitude to the riders and thus club recognitions were awarded. For the Raider Clubs category – four awards were granted. The Biggest Raider Group Delegation went to the Club R150 while the Biggest Raider Chapter Delegation went to Philippine Suzuki Riders Club Laguna. The Farthest Delegation was awarded to Team R150 Tacloban – who rode to Manila on their own all the way from the very renowned city of Tacloban. The Earliest Delegation was awarded to The Raider R150 Owners Club NCR who practically stayed the night in World Trade Center.  For the other Suzuki clubs, the Skydrive Nation received the Biggest Delegation title with an attendance of over 300 riders. All contest winners took home cash prizes plus trophy from Suzuki. 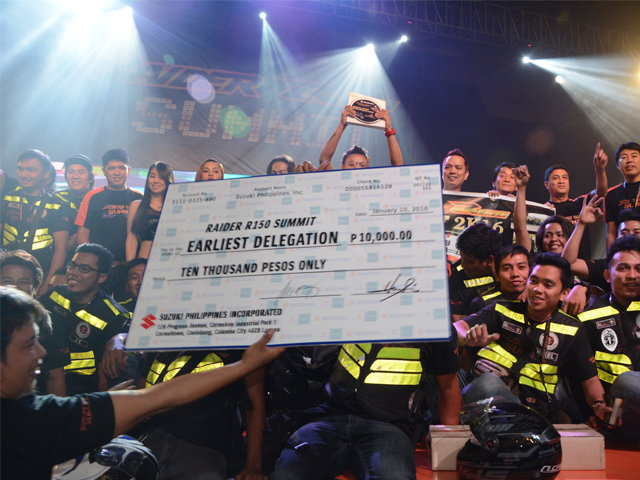 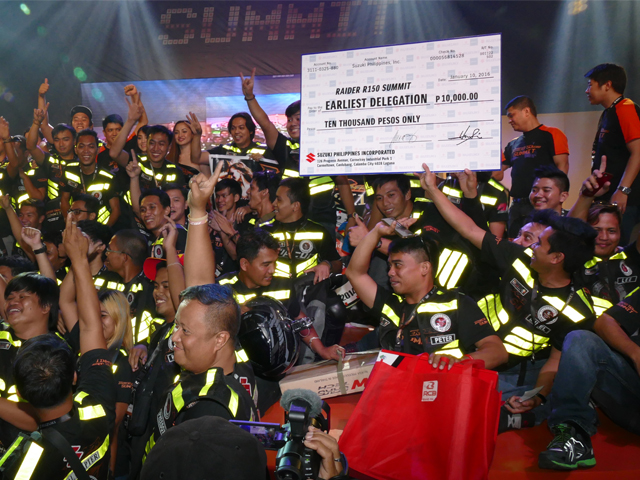 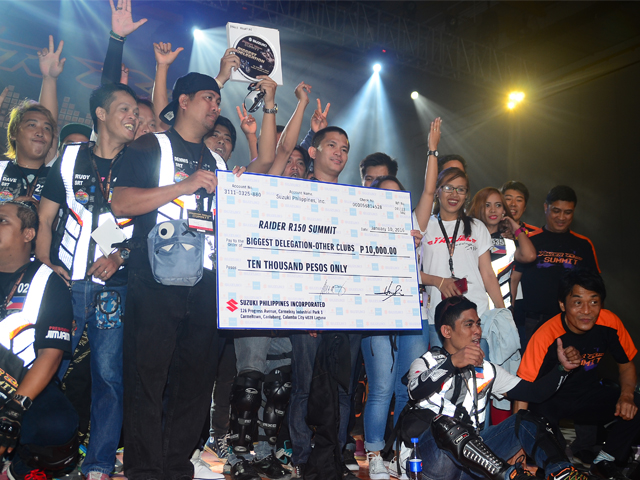 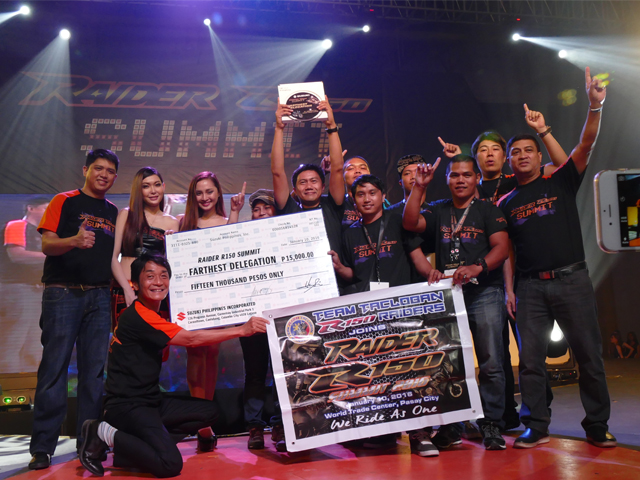 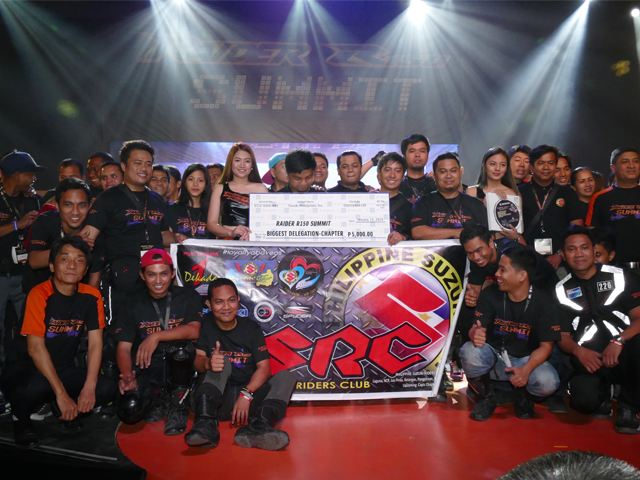 On top of these festivities, Suzuki also made sure that its riders got the best deals on spare parts and accessories for their beloved Raider and other Suzuki bikes as trade partners gave out discounts and exclusive offers during the summit. Among them were Suzuki Genuine Parts, Faito, IRC Tire, NHK Helmets, Gm, RK Racing Chain and Sprocket, Eromina Tires, Bushido, SKK Mobile, MotoActive, RCB, Spyder and Sun Cellular. Suzuki also provided Free Service and Free Motorcycle Wash to the delight of the attendees.

The Raider R150 Summit is an exclusive event for Suzuki owners.