Over 300 Suzuki Raider R150 riders gathered in General Santos City for the SRC’s 1st National Convention – The Suzuki Raiders’ Club (SRC) is considered as one of the biggest motorcycle clubs in the country with 62 chapter members from all over the archipelago. The whole day activity happened alongside the city’s Tuna Festival and aimed to promote rapport and camaraderie among the members. 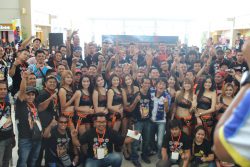 In celebration of SRC’s decade long fellowship, the group organized an event bringing together their members to their home chapter which is General Santos City. The event is composed of two activities – the opening program which took place at Robinson’s Place General Santos followed by the sports fest and other fun activities at the Lagao Gym. 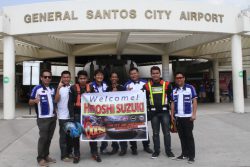 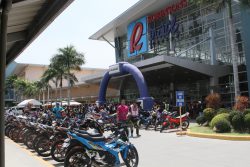 Before the event started, the SRC went to the airport to warmly welcome Suzuki Philippines President Mr. Hiroshi Suzuki. This was immediately followed by a long motorcade which served as the commencement of the activity from the airport to the event venue. Mr. Hiroshi Suzuki personally graced the opening program and happily expressed his gratitude to the SRC members through his speech. He also sang a special song for the members much to their delight. Likewise, the whole SRC family, led by Engr. Edward Signar showed their appreciation by providing Suzuki Philippines a certificate of gratitude which was handed over to Regional Sales Manager Mr. Joel Martin. After the formal program Suzuki Philippines hosted a Safety Riding Seminar as a reminder for the riders to always take precaution on the road. 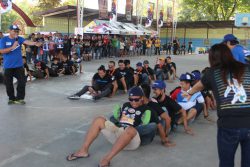 The fun activities continued at the Lagao Gym wherein SRC members happily joined the fun-filled activities prepared by Suzuki. This includes the SRC Basketball Sports fest prepared by the club and a lot of exciting games brought by Suzuki such as bring me games, FB liking in exchange for a free giveaway, darts, stacks and slow race. Also present on the event are Raider R150 Reloaded ladies who stayed for the whole day to cheer everyone and join the fun activity with the riders.  Added to the games and leisure is the raffle draw of the brand new Raider R150 Reloaded and a Custom Bike Contest among the SRC members who proudly showcased their best bike. Both from the Sargen Chapter; Mr. Ronnie Josol won the best custom bike and Mr. Nash Linao luckily grabbed the brand new Raider R150 Reloaded. 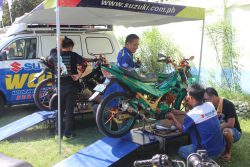 It was a worthwhile activity for the members as their motorcycles were given free service through the Work-on-Wheels (WOW) Service Mobiles which was happening simultaneously during the event.  Indeed, it was a very successful and entertaining get-together for the SRC and the Suzuki Team. To know more about SRC and the growing community of Suzuki, you may join our online community at facebook.com/SuzukiMotorcyclesPhilippines or visit our webpage at www.suzuki.com.ph.