Exploration has no limits, brace yourself for a new level of adventure as Suzuki Philippines brings the much.

The King of Sportbikes is about to reach the Philippine shores and Wheeltek Motor Sales Corporation together with Suzuki Philippines Inc. are making sure that the preparation is set for the royal arrival by gathering two of the country’s most esteemed sportbike riders to put the most awesome GSX-R ever produced to test.

Fresh from testing with Team Suzuki Ecstar, the two GSX-R1000R units were flown from Australia for its debut appearance in the Philippines at the 11th IR Bike Fest and Trade Show. Following this, the country became the first ASEAN nation to test ride the unit. One of the two GSX-R1000Rs was ridden by Philippine Superbikes Champions Miguel Bichara and Anthony Roman at Clark International Speedway (CIS) wherein they would prove that this machine has got what it takes to own the racetrack.

Miguel Bichara is a renowned Superbikes Champion in the Philippines. In 2008, he won the Philippine Superbikes Championship title for Masters Class category with his GSX-R1000. Bichara is considered as an elite superbike rider who races in the country and abroad. He is also a certified motorcycle instructor.  Anthony Roman also known as the Roman Emperor, on the other hand is a well-known underbone racer in the country before shifting to Superbikes. He is a pioneer in the MotoIR category of the Inside Racing Grand Prix. In 2012, Roman won the Philippine Superbike Championships title for the Novice category. He was raced alongside the legend Maico Buncio.

The event ran on individual testing and had it in two parts for the riders – the calibrating lap and the race lap which were all supervised by Team Suzuki Philippines and Wheeltek’s Service Group. Bichara rode the bike first followed by Roman. Superbike riders in the Philippine media were also able to test the unit namely – Maynard Marcelo for C! magazine, Joey Rivero of Driven2Ride and Lifestyle on Wheels TV, John Defensor of Inside Racing and Torque magazines and Aris Ilagan of TopGear Philippines. A press interview was also hosted during lunch to discuss about the performance of the bike.

Both the riders gave overwhelmingly positive comments, Bichara noted that,“Suzuki Engineers got it right the first time. They did a really good job in making the bike very light which is the perfect formula for superbike racing. It is the most refined Suzuki GSX-R ever made with electronics that is the same with top European bikes. Power is very linear. The top end power of the bike is very good already what if we modify it? It is a bang for the buck. The brakes are very good as well. Size is shin; it actually feels smaller than the 600cc. It is the lightest GSX-R and is agile.”

Roman who was a first timer in the GSX-R lineage said, “My expectations were positively surpassed. The GSX-R1000R is very competitive. It can perform well against other brands. Top things that I like about it are the power delivery, braking system, handling and the smooth shifting system. The traction control is a great help. It is the best in its class among its co-Japanese contenders and can be compared to top European sportbikes with its electronics. The smooth shifting doesn’t cause delay thus providing easier riding control. I like it!”

Media testimonials were also optimistic, Maynard Marcelo uttered that, “The bike is very friendly and has very good power band. It is not intimidating. It is very light as well considering that it is a 1000cc motorcycle, it actually feels like a 600cc. The brakes are powerful. It is also an excellent quick shifter. It is smoother overall than its contenders.”

Joey Rivero who also is a racer in the Superbikes category said, “The GSX-R1000R feels like home. When you ride the bike, you easily became familiar with it. Things that I love about it are its quick response, smooth power delivery, quick shifting. When you buy a bike, you buy one that is race ready and that is the GSX-R1000R.”

John Defensor who currently heads the Philippines Superbike Racing Association noted, “Suzuki did a very good job in integrating power delivery, chassis design and lightweight model in a motorcycle which is a really good platform for racing. It has got topnotch predictability, stability and speed alongside its top end power. Braking system is phenomenal for a stock bike. It is smoother and very competitive in Superbikes category. The engine is powerful enough to easily get a podium in the country’s Superbikes racing.”

While veteran rider Mr. Aris Ilagan said, “I’ve never experienced such an obedient bike. It took me just a few turn to familiarize the handling. I am a veteran and I really hope I can make use of such power. It is there. It is the lightest, it doesn’t feel like a 1000cc motorcycle but a middleweight one. It is definitely the “Supremo of Japanese Bikes”.

About the New Suzuki GSX-R1000 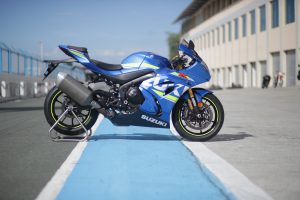 It has been three decades and more than a million sold since the GSX-R line was born. More than 15 years since the GSX-R1000 transformed the open sportbike class. Now, the 6th-generation GSX-R1000 is redefining what it means to be The Top Performer. It embodies the life work of Suzuki engineers who are passionate about the GSX-R1000 and its place in motorcycle history. Men who love riding and racing and are determined to restore the GSX-R1000 to its throne as The King of Sportbikes.

Available in two versions, the standard GSX-R1000 and the limited-production GSX-R1000R, both versions come fully equipped for the street, ready for licensing. But take off the mirrors and the license plate and tape the lights and they’re also ready for closed-course fun.

They are the most powerful, hardest-accelerating, cleanest-running GSX-R ever built. They are also the most compact, the most aerodynamic, the best-handling GSX-R1000, with smoother throttle response and better combustion efficiency with a supremely effective electronic engine

management system that doesn’t require a degree in engineering to understand, and doesn’t need a squad of computer technicians to work.

The new GSX-R1000R and the GSX-R1000 will be available in the Philippines within the year.