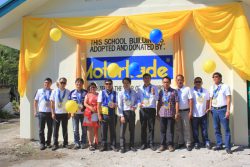 Suzuki in partnership with Motorjoy Depot – Motortrade’s arm in Mindanao worked hand in hand to help improve lives specifically the education of the students of Maria Cleta R. Delos Cientos National High School in Piape, Padada, Davao Del Sur. The turnover ceremony was held recently at the school grounds, which was attended by the school’s benefactors both from the private and public institutions.

The journey in helping Piape began when Motorjoy’s Executive Vice President Mr. Romeo Noro passed by the area and his attention was caught by the makeshift rooms made of bamboo and nipa. His curiosity got him leading him in the discovery of the National High School which was an extension of the Maria Cleta R. De Los Cientos High School located in the more accessible part of Padada. Finding a new purpose, Mr. Noro opened the idea of extending help to Piape to his Motorjoy family of which their President, Mr. Paulino Ongtenco amicably committed to. 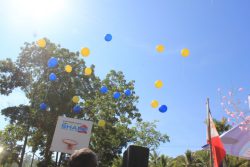 Motorjoy’s initial plan was to donate two concrete buildings – one 21.56 m2 faculty room for teachers and the other – an 86.25m2 3-classroom establishment for the students. For the effort to be more holistic, they encouraged their trusted partners to lend a helping hand too. As one of Suzuki Philippines’ strongest partners, the brand immediately affirmed their participation by filling the rooms with supplies and extended an aid by also donating sports equipment.

Through the Suzuki Philippines Foundation, the heart of the brand’s CSR programs in coordination with Suzuki Helps, Aids and Rebuilds (SHARE), the Japanese giant provided the school with classroom facilities comprising of students’ arm chairs, whiteboards, teacher’s tables and chairs, wall fans, computer sets, emergency lights, bookshelves and sets of sports equipment including basketball ring boards which can be found on the school’s open grounds. 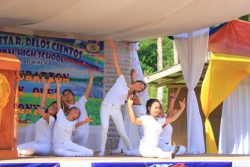 The turnover ceremonies seemed like a festival which opened with the very warm welcome of students and teachers followed by the blessing of the new buildings and items for donation officiated by Rev. Father Jupiter Canoy, DCD. Performances were also made by the students and teachers to the delight of the guests. It was well attended by the supporters of the school from both the private and public sectors – Motorjoy Depot President Mr. Paulino Ongtenco and EVP Mr. Romeo Noro were present, Suzuki Philippines President Mr. Hiroshi Suzuki also graced the event with his presence, Yamaha President Mr. Toru Osugi also came, the Rotary Club of North Davao was represented by Mr. Bong Cristobal, the local government office of Padada was also in attendance led by Mayor Pedro Caminero, Vice Mayor Francisco Guerrero Jr. and the municipal councilors. Along with them were the School Board of Maria Cleta R. Delos Cientos National High School led by Mr. Carmelo De Los Sientos IV. On behalf of the recipients, the school head Dr. Elizabeth Solano, Ed. D. expressed her gratitude to the donors and wished them more blessings as they continue to give back to the community. In his inspirational speech, Mr. Suzuki urged the students to study hard to be part of the development of the country and expressed his gratitude to all who became part of the activity.

Suzuki’s help did not stop at the school as they also have programs in conjunction with the TODA community of Piape wherein the brand provided an AX4 with 6-seater capacity sidecar which will certainly be of great help for the locals in their transportation needs and to aid them in earning a living.

To know more about Suzuki’s CSR activities and SHARE, visit our website www.suzuki.com.ph or join our growing community atwww.facebook.com/SuzukiMotorcyclesPhilippines.