Team Suzuki Ecstar’s Maverick Viñales got his first podium in the considered most prestigious motorsport in the world – the MotoGP.

Vinales finished at top spot after a close fight with his contenders at the Octo British Grand Prix in Silverstone.This win is also monumental for Team Suzuki Ecstar which has just came back in the MotoGP tracks last year.Since then, the team has been consistently grabbing podium finishes including Vinales’ 3rd spot finish in Le Mans France. Team Suzuki is regaining its supremacy on the racetrack again after nearly a decade of absence with the new machine GSX-RR. 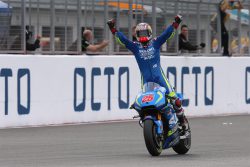 “This victory has been really emotional, my first in MotoGP and also the first for Suzuki since 2007. I felt I was in a good condition and that here we had the potential, but until the race ends you can never know. The team did an absolutely great job, improving the bike since the last races and also in the whole weekend. After the first start I felt really confident and I thought I had a margin to keep ahead, and this gave me the needed confidence to do it again after the second start. My feeling with the machine was perfect, I tried to push hard at the beginning to take advantage and then I just controlled the race. After the last races we felt we had the potential and finally we proved that the job we are doing is really in the right direction,” the rider said. Watch our for his short interview here. 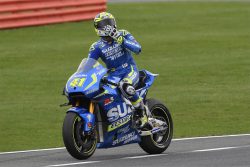 Team-mate Aleix Espargaró put in a strong performance  as well aboard his GSX-RR to finish in seventh position.

To find out more, please visit suzuki-racing.com. You can also watch the highlights of the historic win here.