Exploration has no limits, brace yourself for a new level of adventure as Suzuki Philippines brings the much.

And the Philippine flag is on the podium once again in the international racing scene! Amidst the very tough races, Team Suzuki Pilipinas made sure that they got a podium on their belt when they go home. In a series of heart pounding laps, April King Mascardo, Eane Jaye (EJ) Sobretodo and Mario Borbon Jr. battled it hard with their equally strong contenders to win a trophy.

The race track was bumpy and tricky but first timer Sobretodo was able to lead the pack of riders on Race 1 when teammate April got an overshoot after leading the first laps of the competition. However, the chicane caused him to overshoot as well, resulting to a crash. The team concluded with 5th for Mascardo, 9th for Borbon Jr. and 11th for Sobretodo – all riders with improved lap times. 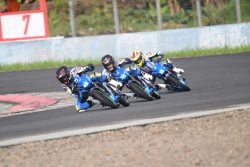 On Race 2, EJ took the lead but was cornered by his equally aggressive contenders. This gave the chance to April to advance into the race. Positioning first on the last lap, April went fast and got out of the pack giving chance to other contenders Jefri Tosema of Indonesia and Rozaliman Zakaria of Malaysia

to get in the lead. Pushing it hard, April finished the race on 3rd place. EJ came back on 6th position with Mario on 8th; all with faster lap times than their records during race 1. Mascardo was even able to achieve the fastest lap on this race.

Suzuki Philippines President Mr. Hiroshi Suzuki was all thrilled during the games and was happy of the results of Team Suzuki Pilipinas’ performance. He also presented the awards during race 1. 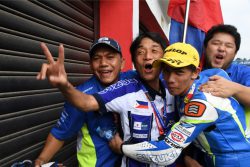 After round 4, Team Suzuki Pilipinas’ overall standings are: EJ Sobretodo on 4th, April Mascardo on 5th and Mario Borbon Jr. on 7th. The team will be back on the SAC tracks in December for the final leg of this season.