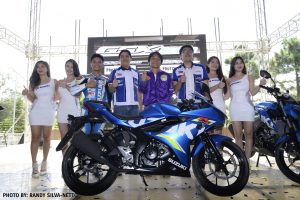 Suzuki Philippines is in full force during the Motorsiklo Xklusibo’s 8th anniversary celebration aptly called as MX GR82B8 (MX great to be eight) at Tagaytay International Convention Center (TICC) with the royal arrival of the brand’s well coveted motorcycles – the Raider R150 Fi and the GSX Series – GSX-R150 and GSX-S150. 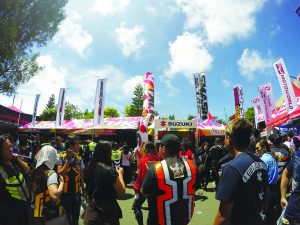 Over 14,000 riders attended the annual gathering and witnessed the public introduction of the latest Suzuki bikes which have been the topic of all riders’ discussions especially on social media for the past months not only because of their handsome looks but more because of their power and performance. These are: the fuel-injected brother of the Underbone King which is considered as the Pinnacle of Hyper Underbones – the Raider R150 Fi and the revolutionary lightweight sportbikes which came from the renowned Suzuki GSX lineage – the full faired GSX-R150 and the naked GSX-S150. 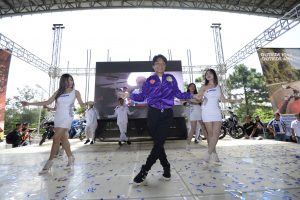 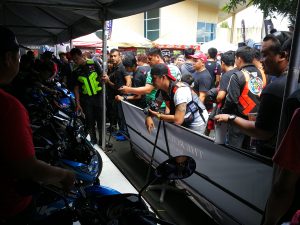 The riders were also given the chance to have a touch and feel of the latest Suzuki bikes at the Suzuki Tambayan which was flocked the whole duration of the activity. Also on display were the latest colors and decals of the well loved Suzuki Smash perfect for the millennial riders who aim for self expression! Riders were treated with prizes too when they joined Suzuki’s online activity! Suzuki owners were given Free Service by Suzuki WOW Mobile at the Suzuki After Sales booth which also offered Suzuki Genuine Parts to those who want to buy. 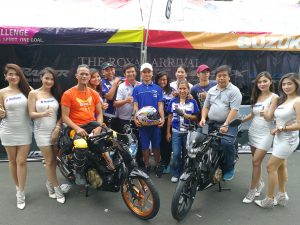 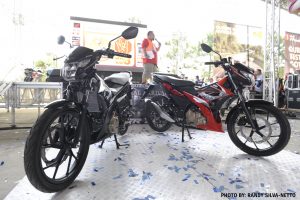 The most awaited underbone motorcycle has finally set foot in the Philippines with all its royalty. From the breed that leads the 150cc underbone category for more than 14 years already, comes the fuel-injected brother of the Underbone King – the Raider R150 carburetor through the Raider R150 Fi.

The Raider R150 Fi is considered as Suzuki’s premium motorcycle in the small bike category because it is the most powerful and fuel efficient 150cc underbone motorcycle in the country promising a maximum power output of 18.36HP/10,000RPM and torque of 13.8NM/8,500RPM in a lightweight and sleek styling. Inherited from Suzuki technologies developed for MotoGP machines, the Raider R150 Fi is powered with a 150cc DOHC engine, 4-valve with 6-speed transmission. It is liquid cooled and sports a full LCD instrument panel reminiscent of the one on the Suzuki GSX-S1000 big bike giving it a premium feel. It also boasts of a key shutter, tubeless tire, wavy disc brakes and a mini storage space.

Coming from Suzuki’s legendary GSX lineage – the GSX-R and GSX-S, are two sportbikes that will revolutionize the lightweight class. Powered by Suzuki’s GSX DNA, these new motorcycles will bring the brand’s signature engine performance on track to your everyday ride. Perfect for those who wish to bring their riding experience to a whole new level, riders who want a superior yet comfortable ride for daily commute and an exciting leisure bike for fun rides – or even track day – on weekends. Both have the best power-to-weight ratio and acceleration in the 150cc backbone category. 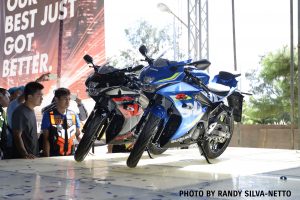 Fresh from its debut at the Suzuki Asian Challenge – Suzuki’s developmental program to discover and train future MotoGP champions through a single-make competition on a Suzuki bike, the GSX-R150 – from the hierarchy of the King of Sportbikes – GSX-R1000R is now available to dominate the Philippine roads.

A handsome looking ride giving you a big bike feel, the GSX-R150 guarantees a powerful performance with its 150cc DOHC engine (4-valve, 6-speed transmission) bearing a maximum power of 18.9KW/10,500RPM and Torque of 14.0NM/9000RPM. The GSX-R150 also boasts of a technology that is the first in its class – a keyless ignition system with a remote control that has an answer back function for up to 20 meters and is equipped with Suzuki Easy Start System. It also possesses a full digital instrument panel with an LED headlight. Completing the sporty look are the wavy disc brakes and a dual exit exhaust muffler. The GSX-R150 is priced at 156,000 and is available in Black and MotoGP Edition. 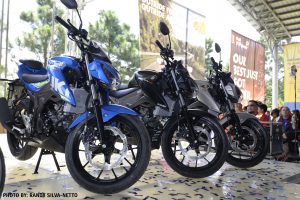 Dubbed as the streetfighter sibling of the GSX-R150, the GSX-S150 is a naked street sports bike from the Suzuki GSX-S lineage. This ride is built to dominate the urban roads while also stirring you to bring it to an exciting weekend tour outside the city. Just like the GSX-R150, it is powered by a 150cc DOHC engine with 4-valve and 6-speed transmission bearing a maximum power of 18.9KW/10,500RPM and Torque of 14.0NM/9000RPM. It has a key shutter and is also operated with Suzuki Easy Start System. It also has a full digital instrument panel and an LED headlight for wider viewing at night. It also boasts of wavy disc brakes and dual exit muffler for fuel efficiency. The GSX-S150 is priced at 112,800 and is available in Black, Silver and MotoGP Edition.